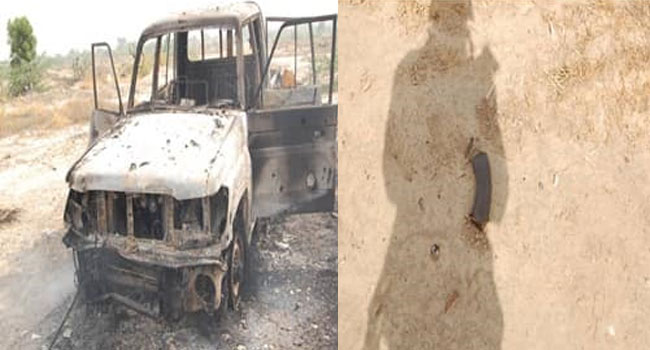 Five Boko Haram members have died in successive attacks on troops of 64 and 98 Task Force Battalions and elements of the Armed Forces Special Forces Battalion at Malam Fatori in Abadam LGA of Borno State.
The attacks launched on November 13 and 15, 2019 by Boko Haram members, were repelled by the troops who outgunned the insurgents.
In a statement by the Nigerian Army Operations Media Coordinator, Colonel Aminu Iliyasu, the first of the attacks on troops of Mallam Fatori was an attempt to infiltrate the military formation.
“On 13th November 2019, some marauding Boko Haram criminal elements attempted to infiltrate the troops’ location by launching an unsuccessful attack with Person Borne Improvised Explosive Devices (PBIEDs), Gun Trucks, Rocket Propelled Guns and other small arms but were decisively annihilated, having been made to suffer very high casualties in both men and equipment.”
He added that the insurgents launched another attack on the troops less than 24 hours and was countered by the troops, which led to the eventual death of five.
“Within less than 24 hours of their devastating defeat, however, the outgunned criminal insurgents launched another desperate attack on the highly spirited troops of Mallam Fatori in the wee hours of 15 November 2019.
“In their swift and highly coordinated response, the gallant and relentless troops at the location once again brought their resilience, bold action and superior firepower/lethality to bear on the criminal insurgents as they handed them another crushing defeat. At the end of this particular encounter, one Boko Haram Gun Truck was completely burnt along with 3 of the criminal insurgents that were trapped in it.
“Apparently, the vehicle was gutted by fire as a result of the high volume of fire delivered by the troops. Furthermore, 2 of the Boko Haram criminal elements were equally neutralised during the ensuing gun battle between the troops and the criminal insurgents,” he stated.
Some of the equipment recovered from the attacks by the insurgents include one Anti-Aircraft Gun, one Anti-Aircraft Gun barrel, eight AK 47 Riffles.
Others are: one Rocket Propelled Gun tube, three AK 47 magazines, one bandolier, two rounds of Anti-Aircraft Gun ammunition and one Rocket Propelled Grenade bomb.
Colonel Iliyasu revealed that two soldiers sustained gunshot wounds when the Air Task Force, Operation Lafiya Dole went on the trail of other insurgents.
He intimated that both men have been stabilized and are receiving treatment at a military hospital.