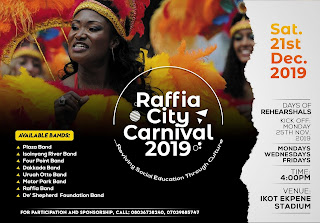 According to the Supervisor for Culture & Tourism; Hon. Ekerette Ibanga, the band names represents unique & historical places in Ikot Ekpene the Raffia City being the first Local Government in West Africa.
He also added that through the band names; some of the places that seem to have been forgotten in the Area will be brought back in the mind of the people as we celebrate Christmas.

Meanwhile, Rehearsals for all members of the band is scheduled as follows: