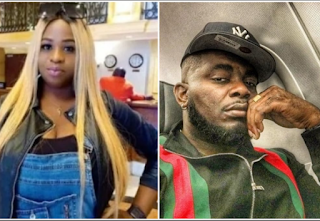 In a new video posted to his Instagram page, the veteran singer called out his babymama for allegedly taking their daughter to meet men in hotels and allowing her dance to inappropriate music.

The singer also claimed that he hasn't spoken to his daughter for a year after her mother allegedly took away the phone he gave her while reacting to Mirabel's claim that he doesn’t call his child.

Kelly also accused his babymama of tarnishing his image and planning with 'evil people' to ruin his career.

He further threatened to release videos of Mirabel admitting to her friends that she's been telling lies against him and photos of her visiting hotels with men.

Sharing the video, the singer also wrote: "To whom it may quansan, better be guided before talking sh** because you no go fit hold me o, hmm trust me. Juju never fade? E don fade now but someone will pay for all the damage done. If they act stupid, we gon act stupider because we’re stoopider than them. Ozuo."

There has been no response to "GX GOSSIP: Kelly Hansome calls out his estranged baby mama, Mirabel Moraedeyo, for allegedly taking their daughter to meet men in hotels (Watch Video)"