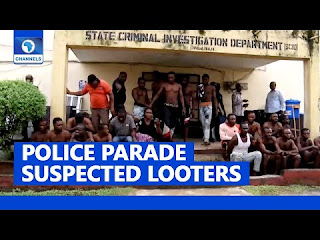 The Cross River State Police Command has arrested one Johnson Richard Inem, an indigene of Akwa Ibom State for allegedly masterminding the recent looting and vandalisation of the Calabar International Conference Centre (CICC).

The Police Public Relations Officer, Irene Ugbo said the suspect was arrested at Esuk Otu Community with various items based on report gathered during the house to house search which started on Sunday in the state as ordered by the state Governor, Professor Ben Ayade.

The Police spokesperson explained that the suspect is an automobile mechanic based in Calabar and has confessed to the crime.

“He made a confessional statement on how some of his boys came and carried out this crime. So, most of these people that vandalized government properties are not from Cross River. Most of them are from Akwa Ibom State.

“He has given us some names and we are going after them. For now, we are going on a house to house search and if we find anyone with any government property, any personal individual property, we are going to arrest them,” she said.

The suspect, however, denied looting or vandalising the conference centre.

He claimed that he was sleeping when the police came to arrest him in his house.

The Police spokesperson announced that the command will stop at nothing until other perpetrators are brought to justice as she applauded residents for sharing information and complying by returning stolen items in their possession.

Over 90 other suspects were arrested for allegedly looting chillers, over 1,000 pieces of customised chairs, customised designer carpets among other items.

There has been no response to "NEWS: Police Arrest Alleged Mastermind Of Calabar Conference Centre Looting, Recover Over 1,000 Chairs"