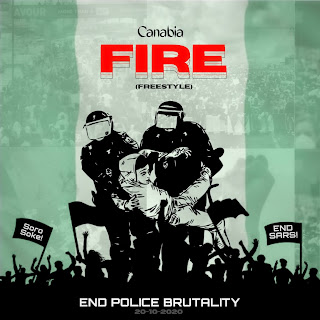 The #EndSARS protest is seen as the largest people oriented movement to happen in Nigeria in recent times. Nigerians In Nigeria and in Diaspora have taken to the street and social media to protest against police/SARS brutality which has ravaged the country for years. Amidst the chaos and uncertainty, Idiake Kennedy popularly know as Canabia shares a heartfelt message in a song he titles “Fire”.

In his words, The “Fire” represents Bad governance, police brutality, extra judicial killings and injustice currently going on in Nigeria, which if not properly managed may lead to a bigger problem, including war, as we’ve seen what started off as a peaceful protest been hijacked by hoodlums who have been attacking protesters, looting and burning down buildings/businesses.

Despite the uncertainties, Canabia hopes and prays for a better Nigeria.

There has been no response to "MUSIC: Canabia - Fire (End Police Brutality)"