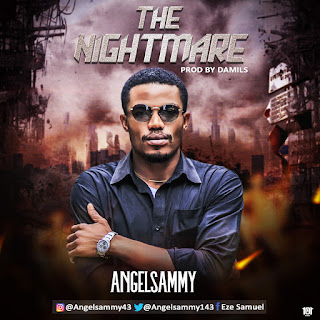 There are songs that goes for love and affection, for dance and shows, entertainment and freestyle; but this is one song that looks at the future from the present not forgetting the touch from the past.

"THE NIGHTMARE" speaks on the injustice, extravagant killings, social vices, neglect, impunity, bad governance, etc. The words among the lyrics are arranged in a simple way to pass across the message, also bearing in mind that this are the present happenings in our society where they sweep it under the carpet and tend to match on it. But forgets to know that one day the carpet will get soft and will expose all that is hidden under it.

THE NIGHTMARE speaks volumes in it own and assures of that the future we seek is totally different from what is been done now, unless things changes for good, then it remains a NIGHTMARE that the future generations will not be able to attend.
We speak one voice and act onely because we are one.

The songs is written by Angelsammy, produced by Damils. Both have residence in Jos, Plateau State. Nigeria

Angelsammy is a music minister who started his music back in the days in Enugu State, moved over to Plateau State for his NYSC where he served and stayed back where he practices his profession as an Optometrist. Has dropped songs like; (More Than, There is a God, Sweet Baby Jesus,) to mention but few.

Relax and enjoy yourself.
Listen to the message, and think about the future that we collectively seek...

This song is for everyone living on Earth.

God is still the Maker of all things