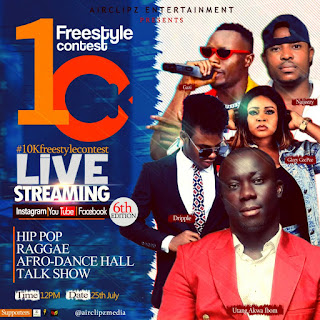 On the visit, the governor's aide and number one entertainer in the state is billed to grace the weekly 10k Freestyle Contest and inaugurate the pioneer executive of Ikot Ekpene Entertainers Association (IKEA).

Ikot Ekpene Entertainers Association is formed as an umbrella body of entertainment practitioners in the Raffia City, comprising of Comedians, DJs, Musicians and more.

While the 10K FREESTYLE concept is set out to reward any musician who can hit a- 10,000 - views mark on the Airclipz Youtube channel to win the sum of N100,000 (Hundred Thousand Naira).

The 6th edition of the weekly rap battle with feature talented artistes in the state, inspired by the need to unite musicians in a friendly freestyle contest, which would go a long way in engaging and building up fanbase for participating artistes.

According to Utang Akwa Ibom, the working visit to Ikot Ekpene is to further consolidate the structure of the industry outside Uyo, the state capital, also to give hope to the talents by reinstating the plans of the governor to invest in the entertainment industry.