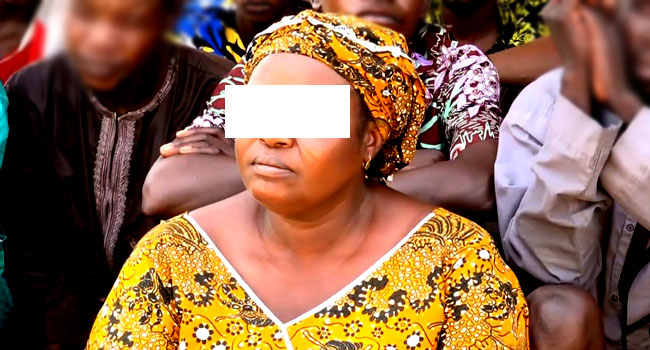 A file photo of Mary Yakubu

The police in Taraba State have again arrested a suspected child trafficker, Mary Yakubu, with 27 children.
The Police Public Relations Officer in Taraba, David Misal, disclosed Yakubu’s arrest in a statement on Monday.
He noted that it was the third time the suspect would be arrested, making it 60 children that have been rescued from her.
Misal explained that the children were rescued on Sunday at Tashan Takalma community in Gassol Local Government Area of the state.
The 27 rescued children comprise 14 males and 13 females.
According to him, 33 children have been reunited with their parents while the suspect is undergoing trial in a court.
The command’s spokesman added that the newly rescued 27 children have been handed over to the State Ministry of Women Affairs.
The suspect was first arrested on February 26 in Bali by the detectives attached to the Bali Police Division in connection with a case of suspected child trafficking.
Upon her arrest, she was found with 23 children while making an arrangement to convey them to an unknown destination.
Yakubu was again arrested on March 4 and led a team of investigation police officers to Mararaban Donga, in Donga LGA of Taraba, where additional 10 children were rescued.