NEWS: Court fines Police N2m for detaining pastor and his wife for over 24 hours 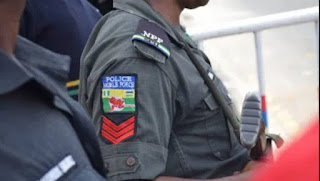 The Police Special Fraud Unit (PSFU) Ikoyi, Lagos which was found guilty of breaching the fundamental human rights of one Reverend Godwin Izuchukwu and his wife Reverend Prayer Godwin by detaining them for 8 days, have been handed a N2m fine by a Federal High Court in Lagos.

Recounting their ordeal before Justice Sule Hassan's judgement, the clerics disclosed that they were unlawfully detained from April 24 till May 1, 2019 by the SFU, at the instance of one Jane Nzekwe and Kate Nwuba.

Reverend Godwin Izuchukwu and Reverend Prayer Godwin who sought for N100million as damages, alleged that they were beaten and tortured by the SFU operatives.

Justice Sule Hassan who ruled on the case which has the Inspector-General of Police (IGP), Police Commissioner in-charge of PSFU, Jane Nzekwe and Kate Nwuba as respondents on Wednesday March 11, stated that security operatives infringed the provision of the constitution.

By GbeduXclusive Admin
Tags Court fines Police N2m for detaining pastor and his wife for over 24 hours, News