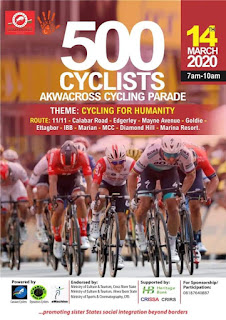 The event which is also endorsed by the Cross River State Ministry of Sports and Cinematography, will serve as a platform for promoting sister States social intergration  beyond borders as well as take the marketing of the State's tourism products a step further.

The Commissioner for Culture and Tourism Development, Mr Eric Anderson said the plan to create the cycling route through Calabar South Local Government Area, is a conscious effort to include the area in the tourism map of the State,adding that the parade will see over 500 cyclists cycle from 11-11 Roundabout, to Calabar road , Edgerley, Mayne Avenue, Goldie, Ettagbor, through IBB, Marian, MCC, Diamond Hill and terminating at Marina Resort.

The Cycling showpiece is Powered by the Canaan Cyclers, Dynamic Cyclers and eMachine, with the support of Heritage Bank,  Cross River State Signage and Advertising Agency(CRISSA) and the Cross River Internal Revenue Service(CRIRS.)