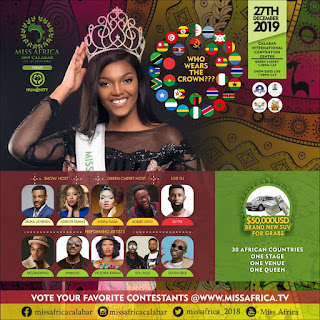 Miss Africa Organization have announced a rich line up of stars confirmed for the 2019 edition of the pageantry in Calabar, Cross River State.

The release confirms that rave of the moment Zlatan will be performing at the star studded event alongside African ragga king  Patoranking, DMW star Perruzi, African queen Victoria Kimani, blast from the past, Style Plus and a host of others. 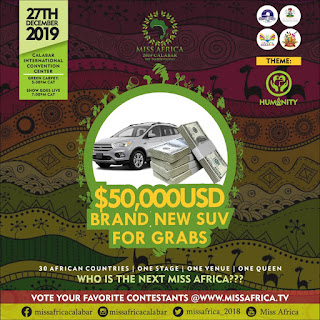 This assures that December 27, fixed for the 5 star event at Calabar International Convention Center, will be a night of thrills and suspense, as beautiful contestants enter for a battle of wits on stage to win a brand new car and thousands of dollars. Most importantly, to become the new face of hope to lead a campaign for issues affecting Africa and Africans.

The executive Governor of Cross River State, Sen. Prof. Ben Ayade will lead a delegation of high-profile guests from the political and corporate class to witness the ceremony. 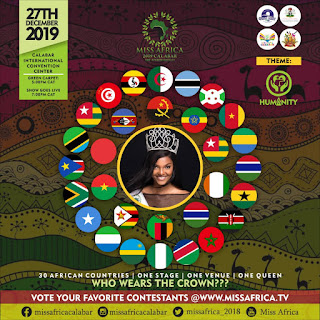 There will be a live stream online and  broadcast on DSTV to keep millions of viewers across Africa glued to their screens for the historic Grand Finale of Miss Africa 2019 live from Calabar, Africa's tourism capital.

The glitz and glamor begins on the green carpet which will be hosted by Roy Ekpo and Wofai Fada. While compere and fashionista, Ebuka will anchor the ceremony in company of beautiful Joselyn Dumas.

Also, as usual, there will be a Parte After Parte with the creme de la creme of the industry, the immediate past, the reigning and newly crowned queens alongside damsels from across Africa. Incredible DJ TTB takes charge of the wheels with a guarantee to keep you glued to the dance floor.

It promises to be a night of fun extravaganza for guests and viewers.
Keep a date.