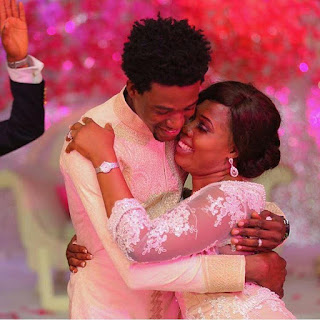 In the mood of festive and celebration,  Celebrity/Makeup artist Awele Aina celebrates 4 years anniversary with her husband Director MattMax. We were to ask her some few questions about her marriage and how its has been, kindly enjoy her awesome interview

1. How did you meet your Hubby
Answer: We met on a music video set. I’ve been longing to work with him, since I’d worked with different other directors like Adasa Cookey, Patric Elis, Clarance Peters, Moe Musa, Mex. He finally called me one day for a shoot. He mentioned he got my number from a vixen. I was amazed the moment he told me how excellent my jobs were, even to the point of telling me couples of it he saw on tv. His complements were breathe taking; a whole Director Mattmax calling me for job! To cut the story short, I told him I was available and also told him my charges. I actually over charged him for the impromptu job, he told me he’ll call back in an hour. Shockingly after a long wait, he never called. I decided to call him instead but he never answered my calls neither did he return it. Seven months later my friend Laylow called me to make him and the vixens up for his shoot, as God would have it; Director Mattmax was the director! I put in extra effort like I normally do on every job I get. The makeup of the five vixens  was on piont. “Wow, I love this, the makeup is flawless!” that was his remark the moment the vixen hit the set. That moment I felt on top of the world. Nothing in this world makes me happy getting good remarks as such from my client. I would say that one job gave me a ticket to work for him as his official makeup artist. Automatically I became part of his team, from there we became friends and the rest is history (blushing)

2. What attracted you to him in the first place?
Answer: He is easy to communicate with. He is loving, understanding and hard-working among other good qualities. I married my best friend

3. What’s the secret of your union for the the past 4 years
Answer: For me, I think it’s the fact that we have a deep foundation: “You’ve got to find the right person. It’s powerful, but simple.” the best part of being married to my husband is being completely understood. We always work toward finding mutual understanding—which is predicated on respect—as the foundation of our love. My husband and I  understands each other completely. Sometimes, there are a few arguments but we always resolve them in love. We have learnt to understand each other better and spend more time together. Friendship, love, mutual respect and understanding each other are key ingredients of a successful marriage. Also, it is important to be prayerful as partners. I have someone whom I can talk to about anything and someone whom I care more about than I’ve cared about anybody and we know each other better than anybody. We stay together because we love each other

4. Can you remember a specific moment in time when you knew you would end up marrying Director Mattmax. Answer: I distinctly remember one of the first times he called me at home and we talked for almost five hours on the phone. When I hung up I thought, “I could marry that man!” From our first phone conversations, we were never at a loss for words and we talked about deep things right from the start. He could hold his own in a conversation and that meant a lot to me.

5. When you said “I do,” could you imagine that you’d still be married 4 years later? Do you think you fully comprehend what it meant?
Answer: I hoped that we would, but honestly I had no idea! We had a lot of naysayers surrounding us when we got married—so many people only gave us one or two years tops. I think we both went into marriage with the idea of forever (as both of our parents had long-time marriages) but we were also realistic and knew that without commitment, it wouldn’t last.

6. What aspect of marriage are you most pleasantly surprised by?
Answer: The comfort and security of a long-time partner. It is always good to know that you have someone in your corner who loves you, who you can count on to be there for you through thick and thin—and to know that your spouse will comfort you when you need comforting and celebrate with you when something good happens, Knowing that your partner cares about what happens to you is everything.

7. What do you think is the most challenging part of being married
Answer: Managing the pressures of life and your own personal “stuff” as well as your partner’s day-to-day cares and worries. Your life can be going okay and your partner is struggling with something and you can’t escape that (and vice versa). It can be hard at times. Also, recognizing that we have different needs and learning how to compromise and balance it all out.

8. What’s one thing that your husband does that makes you feel glad you married him 4 years ago?
Answer: He loves me unconditionally. He would do anything I asked him to do (within reason!) and will never hesitate to do something that he knows will please me or help me out. When I see myself through his eyes, I see just how much he loves me, and it makes me love him even more. He is my biggest cheerleader and always encourages me to go after my dreams.

9. What advice do you have for couples about to tie the nut?
Answer: I don’t know if there is a key piece of advice for I’m still new in this institution called marriage myself but one thing I know for sure is that it is important to marry someone with whom you share the same values. My husband and I would never have lasted as long as we have if we didn’t value each other and our family above other things. Life requires a lot of patience and trusting that everything will be okay. Learn to forgive and not to keep score. Everyone can be difficult to live with at times—learning to move on is very important. Let go of angry feelings as fast as possible. Forgive yourself when you feel that you have not lived up to your standards.