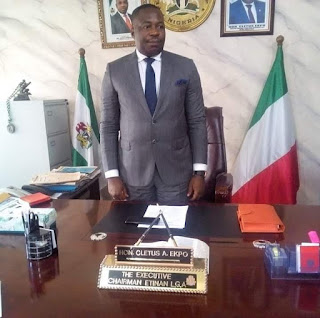 I join the leadership and good people of Etinan Local Government Area to felicitate with the Chairman, Mr Cletus Ekpo for the commendations recorded during the hosting of the Akwa Ibom State House of Assembly Committee on their ' unscheduled ' visit.
Even the LGA of the Chairman of the committee (Nsit Atai) did not find it funny in the hands of the committee. However, conscience had pricked me after my first write up 'ETINAN: WHERE IS YOUR VOICE?' fell on deaf ears which gave birth to a decision to be vocal about issues concerning Etinan.
Thereafter, I felt a deep sense of responsibility to my people and land of origin, following my interactions in the grassroot. I carefully analysed the situation with due consultation to persons from different age brackets in the demography.
My conclusion was simple, 'you can be the voice' an inner voice said to me. It reaffirmed again, YOU ARE THE VOICE. It is based on that inclination that I find it important to ask these succinct questions on behalf of people in Iman South where the current Chairman hails from.
I sense some sort of disconnection. In the last 10 years, can any project in the south be credited to the present administration at LGA level ?
Is there any road graded after Nkana in the south ?
What is the state of electricity and the rate of supply in Etinan south 2 precisely?
What are the measures put in place to tackle the issue of insecurity which is faced by banks and financial institutions in the community ?
What step is taken to open up the community for telecommunication companies to install more masts to boost network in the area ?
It is very sad that the Ikot Mfon - Ndiya bridge which has brought disgust and raised dust in the area and in the media is still in that sorry state.
Before you take a bow Sir, I think you need to rejig your media team and advisers. At least a visit to the site to make a promise would have not just scored political points, but shown concern to all concerned. Maybe we would have held you by your words today, but no, nobody cares because there's nobody to speak. Unfortunately, those issues go unattended to by the office of the number one citizen of the LGA.

While I commend the level of youth involvement in the affairs of the local government in your tenure. I think a lot more should be done. The construction works (as seen in the local government head quarters) and the empowerment of youths through job creation and appointments do not have direct impact on the lives of the common man without political connection or relationship.

How has the administration bettered the livelihood of the farmers and petty traders?
Like I said in my first article in the 'The Voice of Etinan' series, 'sincere answers to these questions and consideration of a collaboration will bring about solutions to some challenges faced by our people and will complement government efforts.

Some of the problems in interior and rural areas (Southern Iman) include but is not limited to portable water, access roads, erosion, poor telecommunication network and most importantly power supply. Interestingly and unfortunately, they can be solved by well meaning individuals which the area boasts of, but that is when government paves the way. 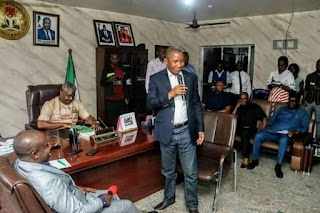 Nelson NseAbasi is a journalist and talent manager from Ikot Obio Eka, Etinan LGA.
He is the Secretary General of Coalition of Online Publishers, Akwa Ibom State (COOPA).