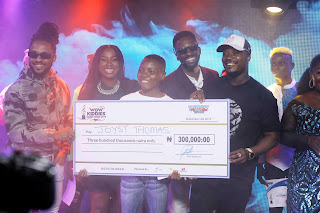 It was all excitement as winners emerged in the Grand Finale of Wow Kiddies Talent Show Season 1hosted by FireHits Studio and produced by Uduak Peters of G2M Creatives. The finale which took place Saturday 28th September 2019, was Hosted by Tito Da.Fire andGiftyy while judges were SingerJaywon, On-Air Personality and Blogger Ore Onile–Ire of Lagos Talks FM, recording artiste and modelMinjin.
Highlights of the grand finale which had 5 finalists aged 7-15 years, included a heartfelt rendition by Louis Chinyere where she belted Tiwa Savage “All Over” and Joest Thomas’ energetic performance of Burna Boy’s Anthem as both performances received standing ovation.
The finalists Joest Thomas, Thankgod Favour, Musa Mustapha, Louis Chinyere and Alabi Ayoola  exhibited evidence of nurturing they received during weeks of singing and vocal training.
Tito Da.Fire performance was another bright-note as he delivered a high spirited  medley of “Dream Come True”, “Beauty From Africa”, “Majekaja” and climaxed with “Tito Da.Fire”, Songs from “One Kiss”album.
Wow Kiddies Talent Show grand finale ended with presentation of Grand Prize to  Joest Thomas, winner of N300,000 and a record deal with Grindiin Records, while Louis Chinyere and  Musa Alaba won N200,000 and N100,000 for first and second runners up respectively. The talent show which promises to be an annual nationwide  talent search was powered by G2M Creatives, Grindiin Records and FireHits Studio, with support from Mazaton Ventures Limited.
In Jaywon’s words, “my being a part of this as a judge was very heartwarming and I am glad I came and saw raw talented kids and I’m looking forward to see them at the top of the music industry”.