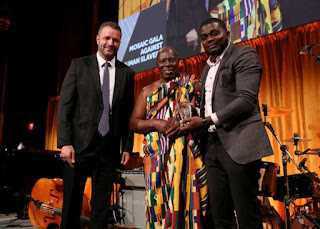 Kelly Hansome becomes the first Nigerian and African to receive the MOSAIC International Award which was presented during a benefit dinner on September 10, 2019 in the heart of Manhattan, New York as part of the events marking the New York Fashion Week (NYFW) and a MOSAIC Federation (MOSFED) worldwide outreach to raise awareness on human slavery and trafficking, which effects over 40 million people globally.

“Slavery in Africa” with lyrics, “Human life is priceless, somewhere in Africa a human like you is sold for just four hundred dollars”, is part of Kelly Hansome’s ‘OMENWANNE’ album which was released in March 2019, and it had the singer who has carved an international career for himself receive the prestigious award from His Excellency Dr. Barfour Adjei-Barwuah, Ambassador of the Republic of Ghana to the United States of America and Tony Schiena, CEO MOSAIC Federation.

Introducing Kelly Hansome, Tony Schiena said; “Normally it’s your traditional short film PSA product but this year someone really just wowed us with a song, and it’s a music video but really it’s about the lyrics in the song; and very appropriately – considering our accompanying with the Ambassador – the song is about Africa.” 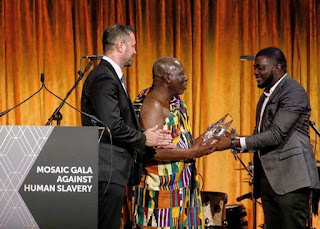 Kelly Hansome who also performed live alongside Grammy-awarding winning, American-trumpeter, Chris Botti and Friends, at the MOSIAC Federation Gala “Against Human Slavery”, took to Instagram to thanked God for the big win, calling on victims of slavery around the world to hold on as help is on the way. He also paid special tribute to everyone who has been with him along the way, especially William Orioha aka 2Shotz of Wreckless Studios Dallas, who directed the video.

“First of all, I’d like to thank God for this big win because He alone made it possible. To everyone who is a victim of this menace, hold on; help is on the way. To all my #ImoState and AlaOwerri people, we just made history, and this is only just the beginning. Incoming!!!” 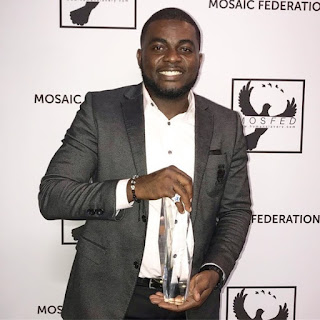 MOSAIC Federation (MOSFED) based in the United Kingdom, is a leading pillar advocating against human slavery and trafficking, led by former intelligence operator, actor and CEO, Tony Schiena.