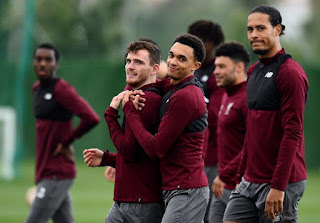 Liverpool have released a strong squad to tackle Pep Guardiola’s Manchester City in today’s FA Community Shield at Wembley Stadium.
According to Evening Standard, Liverpool manager, Jurgen Klopp has released a list of eleven players to start the match against the English Premier League champions.
Klopp’s men head to the game following a 3-1 pre-season friendly victory over Lyon in Geneva on Wednesday.
Below is Liverpool’s starting XI against Manchester City:
Alisson, Trent, Matip, Van Dijk, Robertson, Fabinho, Henderson, Wijnaldum, Origi, Salah, Firmino.
The kick-off time for the match is 3 pm.
Meanwhile, speaking in his pre-match press conference ahead of Liverpool’s clash against Man City, Klopp was quoted by Liverpool’s official website as saying: “The good thing is we can have six substitutions, that’s really good.

“We’ll make a squad for the game, not for the season. We will find the line-up, for sure.
“We will find a starting line-up where you can change six times in that early a game in the season against a very demanding opponent who asks for a lot of footwork and runs and all that stuff. We will probably use all six [subs].”