Menu
Home » GX Gossip » GX GOSSIP: Singer Omawumi Reveals What She Will Do If Her Husband Cheats On Her

GX GOSSIP: Singer Omawumi Reveals What She Will Do If Her Husband Cheats On Her 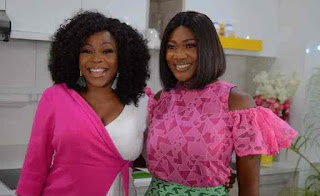 Musician, Omawumi has opened up on what she will do if she finds out that her husband is cheating with another woman.
She revealed that she would not leave her husband.
Omawumi opened up to Mercy Johnson-Okojie on why she won’t leave her husband because of a cheating error during episode 4 of ‘Mercy’s Menu’ kitchen talk show.
When asked if she would prefer if her in-laws tell her about her cheating spouse or educate her partner, she explained emphatically, “They have to educate him about cheating, because if they tell me, I will kill him.”
The host, Mercy Johnson-Okojie corroborated Omawumi’s take saying if she catches her husband cheating, she would rather talk about it with him and get the woman out of their lives.
Continuing, Omawumi said, “No, never (there’s any possibility of leaving my house because of the one cheating error). I can’t leave because of that one error. It’s not a good way to do these things but you know, I call my husband my partner, it’s a partnership, na two of us na hin dey inside (we are both in the relationship together). So, what you would not want me to do to you, don’t do it to me. It’s not feminism, it’s very simple mathematics.
I didn’t say it’s equal partnership because my husband is the head of my home and it’s not feminism but when you go and cheat, and you say it’s by mistake, did you fall inside by mistake? But he needs to explain to me, do you want to do it again? Those are the questions we would discuss and then he will pay a penalty under punishment like say you aren’t visiting home front again because you have gone to visit outside. It has never happened to me before, I and my husband are not saints but we are just blessed and you don’t know a man to the end,” she said.
The music star further stated about cheating “It’s not that I deliberately go out to be mean but you will not want me to cheat on you, so why would you cheat on me and are you going to cheat on me again? Because if you cheat on me again, you can be sure that I will cheat on you”.
Omawumi, who has been married for four years, also revealed to Mercy Johnson Okojie that she had issues with communicating with her husband in the past and she has since then learned how to overcome it.
The singer and actress also hinted that she won’t be having any more children anytime soon.