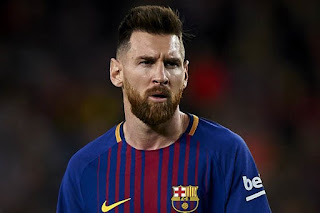 Atletico Madrid boss, Diego Simeone does not think his side can stage a late charge for the title, as he sees Messi as a deciding factor.
Rojiblancos closed the gap to the leaders to nine points with eight games left to play, thanks to a 1-0 win over Deportivo.
Barcelona played a 2-2 draw against Sevilla on Saturday, they were set to lose their first match of the season, after Sevilla went 2-0 up, only for Messi to come off the bench and stage a comeback.
And Simeone thinks his compatriot is the key difference between the top two teams.
“We’re having a very important league campaign. We’ve already seen what happened at Sevilla,” he told a news conference.
“Without Messi, Sevilla would have won 2-0. With Messi on the pitch, Barca won 2-0, although the final score was 2-2.
“Messi is the decisive factor. We want to keep improving our numbers from last season.”
By Lumifiednaija Admin
Tags Sports