Menu
Home » Gbedu Gossip » GX GOSSIP: Man Kicks His Girlfriend’s 5-month-old Baby To Death Because He Caught Her Doing This

GX GOSSIP: Man Kicks His Girlfriend’s 5-month-old Baby To Death Because He Caught Her Doing This

The horrific death of a 5-month-old baby killed by his mother’s boyfriend in Michigan because he suspected her of cheating, has shocked everyone who’s heard of it.
19-year-old Rico Antonio Riggs kicked and severely injured baby Jordan Algee Jr. after the child’s 23-year-old mother Temara Shaniece Reed left the baby at home with him as she went to the store to buy something.
Riggs went through Reed’s phone while she was away and he found text messages from other men and this angered him, so he took the anger out on the child. He reportedly went into the room where the baby was and kicked the baby.
“I lost control, spazzed out and kicked the baby,” Detective Brett Orvis told a judge Reed admitted to him.
When Reeds came home to find her baby crying uncontrollably and having difficulty breathing, she took him to McLaren Flint hospital.
When the baby arrived at the hospital, doctors at first thought he was dead. He was then revived and was immediately transported to Hurley Medical Center, where he died of his injuries on March 25th. An autopsy showed his cause of death was blunt force trauma.
At first, Riggs denied knowledge of what happened to the child. He told police that Reed’s other child, her daughter Nyla, was responsible for the infant’s deadly injuries. 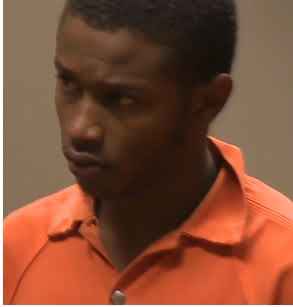 After giving several different accounts of his story, Riggs later admitted he kicked the child over text messages in Reed’s phone that showed she had been in contact with her ex-boyfriends. Riggs also admitted to police he was mad because his girlfriend’s ex-boyfriends had been over the house when he wasn’t there.
Following the death of Jordan Jr., Riggs was arrested and charged with felony murder, first-degree child abuse, first-degree child abuse committed in the presence of another child, tampering with evidence, and intimidating witnesses.
The boy’s mother, Temara Reed, was also charged after she was convinced by Riggs to lie and cover up for him. She was charged with tampering with evidence, lying to a police officer conducting a violent crime investigation, being an accessory after the fact to a felony, and third-degree child abuse.
If convicted, Reed could up to 21 years in prison. Riggs faces a mandatory sentence of life in prison without the possibility of parole if he is convicted of the most serious charges.
Before her arrest, Reed posted on Facebook the night of her son’s death, mourning him. She said losing him is the worst pain she’s ever had to bear.
“He gone. My baby gone what im gone do why me,” she wrote on the night of the infant’s death.