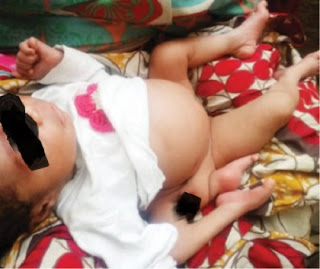 Already his residence at Sabon Garin Makiyawa in Magama Jibia, Katsina State is attracting much curiosity as people from far and near trooped there to catch a glimpse of the abnormal baby.
The husband of a woman who delivered a baby with four legs and two genitals in Katsina State has cried out to well meaning Nigerians for financial help to correct the abnormalities.
The confused man, Malam Hassan Ibrahim appealed to the government for financial assistance for surgery to be performed on what he described as a gift from Allah.
Already his residence at Sabon Garin Makiyawa in Magama Jibia, Katsina State is attracting much curiosity as people from far and near trooped there to catch a glimpse of the abnormal baby.
The baby was delivered by Ibrahim’s 20-year old second wife, Zainab, on March 9, 2018.
Daily Trust reports that Ibrahim and Zainab had been married for four years and already blessed with a three year old son, Fahad.
Zainab was reportedly accompanied by Ibrahim’s other wife, Amina, to the nearby Shema Primary Health Center when she started labour around 10pm but they were told to return home by the nurses who said it was false labour.
After getting home, later that night, labour pains again set in, necessitating a call to the neighbourhood traditional birth attendant, Malama Maimuna, who promptly came to help with the delivery around 1am.
It was when the baby was being cleaned up that the abnormalities were discovered. It was a mix of joy and confusion. Later that night, the father was called to notify him of the development.
“I was a bit shocked and confused but I realised it was a gift from Allah, the knower of all things, and I cuddled my baby and prayed,” Ibrahim said.
“In the morning, the news began to spread like wild fire and people began to troop into my house. The following day, I took her to the hospital and the doctors have now referred us to the Turai Yar’adua Children’s Hospital for medical attention,” he said.
“The child has both sexes and four legs, the two abnormal legs and a penis are on the left side of the ribs, only one of the two additional legs is moving, the second doesn’t.
“I can say it’s a girl because the longer and normal legs have a female genital at their proper place,” Ibrahim added.
When asked if his wife attended ante-natal clinic during pregnancy, Ibrahim said she did and tried to look for her ante-natal card but couldn’t find it as he said the card was deposited at the local government secretariat when he was invited for documentation by the officials.
“For now, I’m made to understand from some health officials that she may need surgery to correct the defects and was given a referral later to the Aminu Kano Teaching Hospital to meet a consultant paediatric surgeon,” he said.
Excessive pressure from curious visitors made the family to begin to hide the child as some in-laws are not pleased with the deluge of visitors.
A copy of the referral letter made available to our reporter indicated that the baby was delivered at home and the mother is complaining of a swelling at her back.
Doctors’ findings and examination at the Turai Yar’adua Clinic stated that “the second twin was attached to the first at the sacral region to the left, swelling at the lumbo sacral region of both twins, polydactyl of the fingers.
The provisional diagnosis was said to be sarcophagus con joined twins.”
Ibrahim said he was unable to move to Kano for treatment, given the financial cost involved and pleaded for assistance from the government and kind spirited individuals to help carry out the surgery.
By Lumifiednaija Admin
Tags GX Gossip