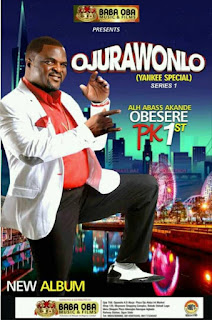 Alhaji Abass Akande Obesere is set to release a new Fuji album titled “Ojurawonlo ” on Monday , the 5 th of
March ; this follows up on his newly-signed multi-million dollar record deal with FreeWorld Music in 2017 – the Fuji icon is an epitome of Omoluabi – the humble and accommodating Fuji musician, along with his diplomacy and humility has also seen him get appraisals likewise with one of the most recent being a man who goes by the name, Ayo Elepo, who’s got nothing but praises for the Fuji star; watch out for “ Ojurawonlo (The Album) ” on Monday, the 5 th of
March .